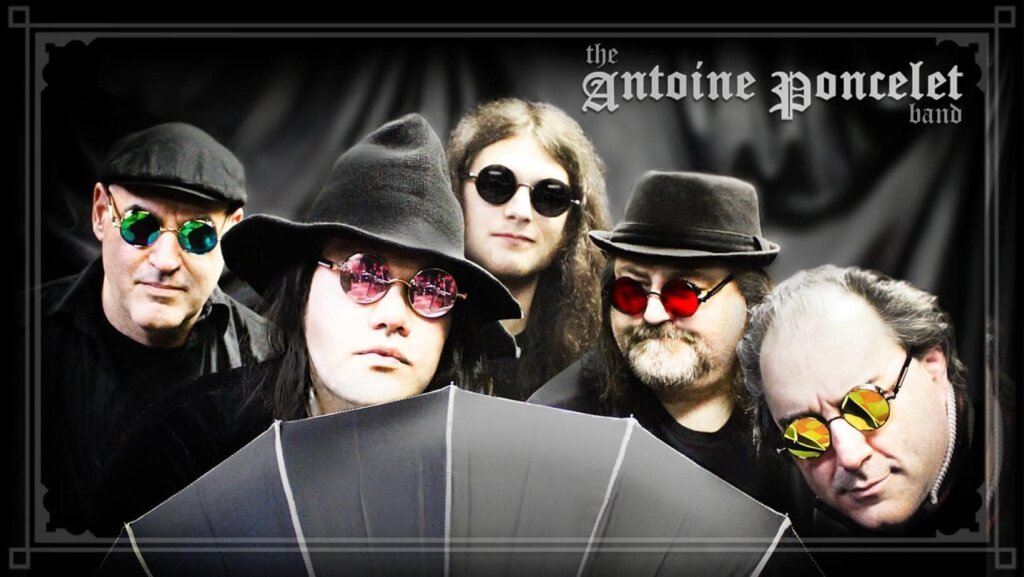 Back in the late 60s and early 70s, there was music that could be called “mystic rock”.  It was heavy, loud, and had a magical essence, with themes of mysticism, nature, and the big questions that humans had about their existence.  Bands like early Fleetwood Mac, Led Zeppelin, and Black Sabbath blended heavy music with the beauty and fragility of life.

These are elements that are unfortunately lacking in today’s music, and the indie bands that do rock usually don’t have the complexity and mystique of the old days.  So, in early 2021, five talented musicians did something about it, and the Antoine Poncelet Band was born.

The band is fronted by the magnetic and passionate Antoine Poncelet, former lead vocalist and guitarist for the group Precious Bones.  Rounding out the lineup are seasoned vets of the New Jersey music scene, Peter Quilla (Vigilante Cowboys) on guitar, Mark McClemens (Goon Saloon) on bass, Santos Menendez on synthesizers, and Justin Wright (Meteor Police) on drums.

The original music is rooted in the physical and spiritual sides of human existence. It is blending themes of nature with the mysteries of the world unknown, fusing the mystical and emotional elements of the life we see and the life beyond our vision.  The rendered lyrics are then coupled to a bed of driving beats and moody, introspective hard rock.

Their sound brings back the soundscapes of premier 70s bands like Roxy Music, T. Rex, and Hawkwind, post-punk icons such as Bauhaus and Joy Division, and performers such as David Bowie and Iggy Pop, reimagining them into a new style for modern ears.  The texture is rough and glittery, with glam careening into deep rocking soul, and a goth undercurrent punctuates the music, blending both the darkness and the brilliant orange sunshine.

The Antoine Poncelet Band has played some of the key establishments of the present day, performing at the Evil Expo convention in King of Prussia, PA, hottest clubs like QXT’s in Newark, NJ, and even won second place at a recent Battle of the Bands contest.  All this cements the band as a must-see.

The End of The End

Let’s cut down every tree
Raise the mountains
Drain the sea
Let’s turn it all into dust
There’s nothing ‘bout nature
That I trust
Let’s dry out every riverbed
Leave every little fish there dead
There’s no balance anymore
We have won the war!

And the gods just shake their heads
And rain down tears of snow
We have won this world
For our very own
Let’s build our new homes
On the bones of the old
Tonight we march upon
The broken back of love
Let’s cut tear down that sun and moon
For we have broken them too
And when there’s nothing left
We will break you!

I’m caught in your trap
And you’re dragging me back
Will I be set free
Or will you paint me black?
Will you cut me to pieces
With my head upon the rack
Will you love me tenderly
As you sharpen the axe?

What would you do
If you found a drowning man at sea?
Would you reach out
Or let him drown in his own dream?

Would you call out
And beckon to him?
Would you hesitate
Or dive right in?

It’s been a Dorian Gray kind of day
Another broken man in a picture frame
Trying so hard to hold on
As the years just fade away..

I was always so Wilde about you

Words are just words
I know
I don’t know

Stay with Me Tonight

I’ve been a pirate and a poet
A nobleman and a thief
I’ve been a heretic, a priest,
A beggar, and a king